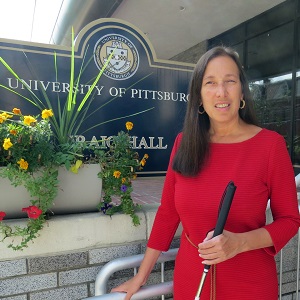 A New Beginning to a Lifelong Career

After 27 years of recruiting for a company, Janet was laid off. As a woman over the age of 50 with a visual impairment, she felt like the odds were stacked against her.

“I wasn’t even sure what a professional resume should look like anymore,” Janet said.

It didn’t take her long to reach out to Blind & Vision Rehab Services of Pittsburgh, a United Way funded and Career Transition Project partner agency. Here, Janet was able to learn new technology and receive career counseling services. When she was ready to start her job search, the organization worked with Tom Armstrong, the Career Transition Professional at the University of Pittsburgh who identifies job opportunities that match the skill sets of people with disabilities.

Coincidentally, there was a recruiting position open in the Office of Human Resources. It was the perfect fit for Janet.

“I have been here since December, and there has not been one day I haven’t been happy to come here,” Janet said. “I have nothing but nice things to say about Tom, this program and Pitt. It’s either: we’re going to figure it out, or we’re going to work around it.”

Donate to help People with Disabilities