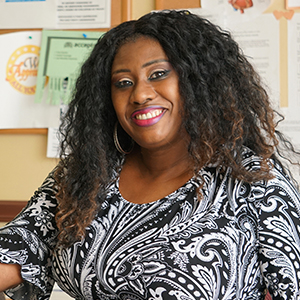 “We were on the verge of homelessness, and now we have a home of our own. I’m so glad I made the call.”

“We were on the verge of homelessness, and now we have a home of our own. I’m so glad I made the call.”

When Shalisa, a veteran and college graduate, decided to leave a stressful job and pursue other opportunities, she and her fiancé were prepared to support themselves and Shalisa’s 11-year-old daughter. She made plans to temporarily drive for Uber and Lyft until she figured out her next step, and together, the family would be financially stable.

That’s when Shalisa’s world came crashing down around her.

“In February 2017, my fiancé suddenly passed away, and days later I was in a car accident. No one was injured in the accident, but my car was wrecked. I wasn’t able to drive for Uber or Lyft until I replaced my vehicle,” Shalisa explained.

Things began spiraling out of control, and Shalisa lost her housing. She was aware of resources, like United Way’s 2-1-1 and the Allegheny Link hotline, where she knew she could find support. Putting her pride aside, she made the call.

“They connected me with the Veteran’s Leadership Program (VLP) and just days after I called, my daughter and I moved in to transitional housing,” Shalisa said.

Shortly after, Shalisa was able to repair her vehicle, and she began driving for Uber and Lyft. She continued to work with VLP, a United Way funded agency, on job coaching and counseling, and they encouraged her to apply for Habitat for Humanity’s Veterans Build program.

“That September, I was accepted into the Habitat for Humanity program, and I started building my house,” Shalisa continued. “At the same time, I was hired at Turtle Creek Valley Community Services as a service coordinator.”

Over the next several months, Shalisa, along with her daughter, friends, family and volunteers, built her home, and by the end of April 2018, Shalisa and her daughter moved in. Habitat for Humanity provided Shalisa with a 30-year mortgage with 0% interest.

“This is our forever home. I’m so glad my daughter can decorate her own room and finally have a place to bring friends,” Shalisa said.

Shalisa is thankful for the help she received and knows her life could have played out differently without these resources.

“It’s okay to reach out for help. I’m a college graduate, a veteran, and a successful person. I never thought I would have been there, but there I was,” Shalisa said. “You just have to make the call. I did, and I’m back on my feet, a home owner and financially stable.”

Why we should support our community’s veterans

A decade of impact