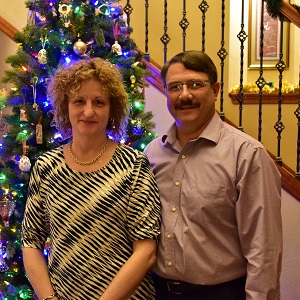 All About Accountability: Dynamic Couple Makes A Difference

“I care about people. I like to roll up my sleeves and get involved with the agencies and their work.” – Bob Clemens

Bob and Lz Clemens are a vibrant couple. Bob serves as vice president and chief technology officer at Kennametal, and Lz is an emergency room physician and internist at several local hospitals. Despite their busy travel and work schedules, their involvement with United Way remains a priority.

Originally from Pennsylvania, Bob and Lz spent many years living and working in Tennessee. There, Bob was introduced to United Way. He initially got involved by donating to his company’s workplace campaign and through United Way’s Days of Action. “Over time, I realized how important it was,” said Bob.  This involvement eventually led to him making a  Tocqueville Society-level gift to United Way.

About four years ago, the couple moved back to Pennsylvania during a transition in Bob’s career. They now reside in Westmoreland County, and easily made the shift to becoming involved with United Way of Southwestern Pennsylvania.

Bob is most fond of getting involved with the agencies and their work. From painting, to cleaning, to being involved as an advisory board member on special projects, to helping with Days of Action, Bob likes the hands-on work. He also spearheaded Kennametal’s annual United Way workplace campaign, where employees are encouraged to be social influencers. “It was a special experience,” he said.

Lz is especially passionate about United Way’s work with seniors and supports its strong partnership with United Way’s Open Your Heart to a Senior program, which is working to match 25,000 seniors with 15,000 volunteers to ensure seniors can get to doctors appointments, the grocery story and live safely and independently in their homes. “I love working with the elderly,” she said.

Bob and Lz are involved on a number of boards and charitable projects; however, it’s United Way’s ability to provide oversight and coordinated support to a large amount of agencies and fundraising dollars that makes them ardent advocates.

“There’s a strategic focus. Donors should know that agencies receiving United Way funding are highly vetted and must be held accountable for their performance,” said Bob. “I can provide money and know it’s well spent.”

Bob and Lz have enjoyed working with other people to make a difference. “I am all about accountability,” said Lz.

The two are also working to make people aware of opportunities to make a difference. “People are generous from their own hearts. We are here to help them understand the difference they can make,” said Bob.