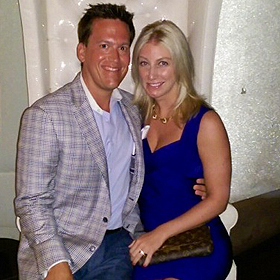 Love of Giving Helps Our Community

Newlyweds Ed and Amy Haller have rapidly earned a reputation for their commitment to the United Way since arriving in Pittsburgh. Though they now live and work in downtown Pittsburgh, they were once separated by a great distance… an experience that Ed claims placed him on the path he is on today. When they first started dating, Amy had just accepted a position for a residency at Yale to further her education, while Ed was working to build his business as a financial advisor. Though being separated was a difficult pill to swallow, Ed realized that “a long distance relationship can be tough, but we both knew we had something special. The dedication to each other for that year made us stronger and also made us learn to appreciate not only the hard work we do but also the value of having that special someone in your life.”

Ed’s hard work and determination lives not only in his relationship with Amy, but also in his career and his passion for helping others through philanthropies. Through his work with United Way and its Tocqueville Society, Ed has strong recommendations for listeners – support United Way.

After witnessing first-hand the impact that programs such as the Impact Fund had on the community of Pittsburgh, Ed decided to get involved with the United Way through Northwestern Mutual and the Young Leaders Program. Ed explains that “I also liked the idea that some funds can be designated for specific charities that I want to support.” Upon getting involved with the philanthropy, Ed began to realize just how many people the United Way impacts in the Pittsburgh community. He explains that “a lot of people are unaware of how often people are able to reach out when they most need help, and are able to find the support. United Way is an organization that is focused more on giving a hand up than a hand out.”

In fact, the Impact Fund assisted more than 100,000 people in Allegheny County just this past year.  Through support for Children and Youth, Financially Struggling Families, Seniors, Persons with Disabilities, and those encountering disasters, the United Way’s Impact Fund benefits a wide communal array.

As his involvement increases, Ed wishes more people were aware of this important work. “The programs that are supported by donors in this area are vital to help those in need.”

Being a part of the Tocqueville Society has largely impacted Ed and his wife through their contribution of helping the community, but they also value meeting other like-minded people through the process of getting involved. Ed likes that the United Way is not only a great cause, but a way to meet new and interesting people. “I have met more unique people at Tocqueville events than at any other type of event I have gone to,” he explains.

Being a part of the United Way and its Tocqueville Society also has its benefits; the community offers exclusive experiences for all of its members. Amy and Ed have participated in numerous events with the United Way of Allegheny County, Ed describing the events as “fantastic.” The participation of “being around so many smart, successful, and influential people” has enhanced the Tocqueville experience for Ed and Amy. The Haller’s leave each event “proud to be part of such a great organization.” They have enjoyed their involvement so much that Ed will be joining the 2014 Tocqueville Committee.

Amy, who is a member of United Way’s Women’s Leadership Council, feels blessed to be afforded the opportunities to continue making a difference in the community and strengthening her Pittsburgh home through the United Way. “It truly is a heart warming experience when you not only know that your involvement is impacting others, but when you see, first hand, those that you are helping in need,” she gushed in an interview. With Amy also serving as a member of the UPMC Women’s Leadership group and Ed serving as a Board Member for the Neighborhood Academy, I think it is safe to say that the newlywed’s love affair with the United Way benefits the entire community.