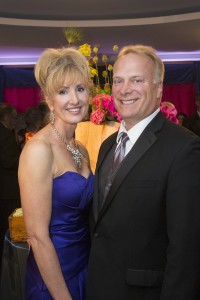 As your World Opens Up, Open up the World for Others

Bob and Jane Krizner met in middle school and married young, after Bob’s freshman year at Juniata College. He was making local headlines as an athlete while double majoring in accounting and computer science. Their families provided some support, but Bob and Jane both worked, too. They didn’t think of their shared determination as unique or unusual. Growing up in southwestern Pennsylvania coal country, they’d “learned a lot from our parents about being self-reliant and the value of hard work. We grew up ‘poor proud,’ around people who were very hardworking and independent.”

After graduating in 1981 Bob joined Peat Marwick which later became KPMG, a global firm providing audit, tax, and advisory services. He cycled through client rotations in New York and Chicago, returned to Pittsburgh in 2006, and “jumped at the opportunity” when he was asked to serve as Managing Partner of the Pittsburgh Office in 2009. “It’s such a fascinating profession,” he says. “When that world opened up to me it was super interesting to learn how various businesses work. And then provide advice, our client’s value.” In his current role, “in addition to serving clients, I look at the firm through a different lens. It’s been a great experience, and an opportunity for tremendous personal growth.”

KPMG has a deep commitment to corporate responsibility, and Bob encourages his partners to become active in the community. When he and Jane returned to Pittsburgh, they took up key volunteer positions with local charities and became clear about the kinds of programs they want to support: “We saw programs that weren’t just giving handouts. They were built around sustainability. They were bringing value to people and helping them come to grips with where they were in life.” This resonance with their own ethic of personal responsibility changed the Krizners’ view of philanthropy, and led Bob to Tocqueville Society membership and leadership-level volunteer engagement at United Way.

Bob explains why he has served on United Way’s Board of Directors and on many United Way committees, and is actively involved in planning KPMG’s annual workplace campaign: “You know, I serve on the Impact Committee now, and it’s clear that there are a lot of really great agencies out there, trying to address important problems. But United Way takes a broader view. United Way’s a forward-looking, proactive, outcomes-oriented organization that draws intellectual capital from the community and its business leaders to pursue solutions that will provide sustainable relief to those in need. Every time I come to a meeting at United Way, that’s the mission everyone’s on. And that’s pretty exciting.”

Bob continues the KPMG tradition of steering young professionals toward Board positions that reflect their personal concerns. He also encourages co-workers to participate in United Way’s Days of Caring, which strengthen relationships while providing structured opportunities to volunteer. “We have over 200 people in the Pittsburgh Office, but they don’t get to see each other very often because they’re usually with our clients. These kinds of events allow people to come together, do something good in the community, and get to know each other better.”

Bob and Jane take great satisfaction in giving back. After working in a number of cities, Bob says, “The sense of philanthropy in this market is something I’ve never seen anywhere else. The thing that’s happening here in southwestern PA – and it’s a good thing – is that United Way is in the forefront of an effort to draw in the next group of leaders. Twenty years from now, United Way may look different. Drawing in the leaders who will shape the future is a really smart thing to be doing.” Bob urges anyone who has the resources to give at the Tocqueville Society level to do so now: “To them I would say, first and foremost, congratulations. Embrace the blessings that you’ve received and that enable you to contribute at that level. Find a cause. Use your contribution to help solve an issue that’s important to you in a meaningful way. Get invested in the activities at United Way. There are many ways to participate. Give. Volunteer. Develop the next generation of community leaders. These are all good things that everyone should take part in.”