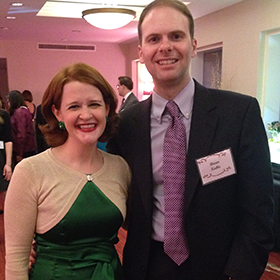 Married for 8 years to his high school sweetheart, Suzanne, Brian Koble is a busy man with three children and a 12-year career working for Hefren Tillotson. After growing up in Erie as best friends with Suzanne and then both finding themselves in Pittsburgh, the couple finally decided to wed. They now have three children: Felicity who is seven, Peter who is four, and Mary who is 6 months.

As a child, Brian had the privilege of being born into a kind and caring family. Not realizing the benefits of having a support system to push him in the right direction until he was older, he now is grateful for having a gravitation pull to aid him if he started to float off course.  Now understanding how formative his childhood was, Brian recognizes that in many ways, the United Way acts as the kind, caring, and supportive family he was born into, which he credits to his attraction to the organization. Speaking of the head start he received from his family, he explains that the “United Way does an amazing job helping people that don’t have that same head start.” Giving examples such as the United Way’s mentoring program, as well as sponsored agencies, Brian believes that the United Way provides the support and gravitation pull his parents did to the kids and adults of Pittsburgh that didn’t have the same privileges. Though Brian did not find the United Way on his own, it was the philanthropy’s family like support system that kept him rooted in the organization.

When Brian was first introduced to the United Way through Hefren Tillotson, he immediately noticed the strong emphasis on the United Way Campaign. A few years into working at Hefren Tillotson, he was asked to lead the campaign, resulting in a new kind of familiarity with the organization. Being able to see the behind the scenes action led Brian to a newfound appreciation for the philanthropy and its efficiency with agencies. “Besides the Steelers,” he jokes, “Few organizations can match the United Way’s ability to pull people together from different walks of life.” Brian credits United Way with bringing together a fractured community by being efficient with the agencies they work with, and making giving convenient with their fun features like payroll reduction.

Being integrated into the United Way community, Brian found joining Tocqueville to be a genuine opportunity to get involved. Meeting members of an active group with different sensibilities and cultures and backgrounds coming together for a common cause was something Brian described as “gratifying.”

From being in charge of the United Way campaign at Hefren Tillotson, falling in love with the support system the United Way provides for Pittsburgh, and finally joining the Tocqueville Society and enjoying the diversity and sense of community the philanthropy creates, Brian has been a huge contributor and supporter of everything the United Way has done in the past, and will do in the future.

Ending his interview on a strong note, Brian encourages everyone to give back, big or small. Defining philanthropic as the love of people, he urges the idea that philanthropy doesn’t have to be through the context of an institution, but rather through the opportunities you make for yourself. Philanthropy is more a mode of existence than something you do every once and a while. Living by this belief, we thank Brian for his contributions.