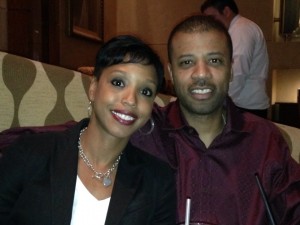 Change Starts with Those Who Can Give Back

Mike and Steffanie Jasper met as undergraduate students at Georgetown University, where they were both on the track team. She was from Erie, PA. He was from the Garfield neighborhood of Pittsburgh. It was romance from the starting signal. “I was a freshman and he was a junior,” Steffanie smiles. “We met almost as soon as I got on campus.” That was in 1989. They’ve been together ever since, even maintaining their relationship long-distance while Steffanie stayed in DC to finish her degree after Mike graduated. Both currently enjoy satisfying, demanding careers at PNC Financial Services Group, where Steffanie is Senior Vice President & Program Manager, Transformation Management Office, and Mike is Vice President, Competitive Analysis.

As a couple, Mike and Steffanie are grounded in shared values that they learned as children.  “I think that having a really stable, strong home environment is a key factor to success,” says Mike. “I’ve been pretty blessed on that front.” Mike sees “a tangible difference” between himself and “other individuals I knew growing up who did not have some of the basic things that a lot of people take for granted: a stable household, stable routine, parents or guardians who provide direction, love, leadership, and discipline.” Steffanie agrees. “I grew up with just my mom,” she explains. “I saw how she struggled from time to time, but she always emphasized the importance of having a routine, having responsibilities. I was a latchkey kid. I had things I needed to do everyday, and they needed to get done by the time my mom got home. She was instilling that sense of discipline, guidance, and responsibility, and if she hadn’t done that I think my life would have been very different.”

It’s this sense of endless, but too often unattainable, possibility that has inspired the Jaspers’ commitment to youth causes. Both are very active in organizations that serve children. “Kids have to be given a strong foundation to become whatever they want to become,” Mike says. “Without that, their options become very limited. They can make the wrong choices.” Because of where he grew up, Mike understands that kids from disadvantaged backgrounds “have the opportunity to do great things. They need someone to believe in them, paint a different picture for them, so that they don’t think their lives are destined for tragedy or failure just because that’s all they see.” As Stefanie puts its, “It’s very important to show that there’s always an opportunity for your life to change. You can do whatever you want to do; you just have to go for it. But you need to know what resources are out there to help you. You need to know that you’re not in this alone.”

The Jaspers have been United Way donors at some level for all of their working lives, at first because the agencies they believe in are so reliant on United Way’s support. Soon, however, they came to appreciate the substantial impact of their contributions to United Way. Steffanie explains: “People may feel that their dollars go further if given directly to a single organization. That helps one agency. But you can help more organizations, and touch more people, by contributing to United Way, especially at the Tocqueville level of giving. Now that we’re more engaged I’m learning so much about the programs United Way makes possible. PA 2-1-1 SW, for example, connects so many people to so many services. It’s fantastic. United Way does more than any single agency can do.” Mike adds, “I’ve been on charitable Boards of Directors since the early ‘90s, and there’s only so much time to give. Being part of the Tocqueville Society is a way to give from the resources with which we’ve been blessed, on a scale that really makes a difference. It’s been a great opportunity to share our life and our charitable experiences with others, too. The more we can talk about that with other people, the better.”

The imperative to give back isn’t an abstraction to the Jaspers; it’s personal. “I have yet to meet anyone at any level of success in life who has done it solely on their own,” says Mike. He cites himself as a prime example. “I can think of a lot of people who’ve helped and benefited me, from the time I was a kid and all through my career. They didn’t have to help, but they saw something in me.  You have to seize opportunities that people give you, but there’s some humility in recognizing that you’ve benefitted from the generosity of others.”

The Jaspers are imparting these values to their three children, ages 14, 12, and 6. “It’s important for us that our kids see that we give back,” says Steffanie. “They are very blessed, as we are. They need to see that not everyone has the same opportunities, and it’s important for them to understand how much it benefits us to help others.” They also want to set an example for other children: “Frankly,” Mike says, “children in inner cities, specifically African American children, need to see African Americans in positions of leadership, modeling stability and giving back.” Steffanie concurs: “In order to see and effect change, it’s important that everyone gets involved. It starts with those who can give back. It’s important that they do.”