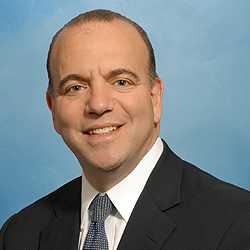 Married to his wife, Shelley, for 25 years, Dan Onorato leads a busy life to say the least. As if having three children, Kate, Emily and Danny, wasn’t enough, Dan spent 20 years as an elected official where he was a part of the Pittsburgh City Council, served as Allegheny County Controller and Allegheny County Executive. Being extremely active in the community, Dan and his wife participated in the Pittsburgh community through his position as an elected public official and through their kids and school affiliations. They are also involved in numerous community and charitable events throughout the Greater Pittsburgh region, including the United Way of Allegheny County.

A Pittsburgh native, Dan grew up in the city on the North Side and attended Penn State University where he received an accounting degree and worked as a Certified Public Accountant for Grant Thornton. Dan then returned to his roots in Pittsburgh to attend the University of Pittsburgh School of Law. He worked for a law firm before he entered the public life.

Early on with his involvement and position as a city council member, county controller, and county executive, Dan first got involved with the United Way because of his appreciation for the benefits and services that United Way provided to people in need. Embracing the United Way’s Day of Caring in the early 90’s, Dan personally and professionally created teams of hundreds of volunteers and selected projects to volunteer from spending time at community shelters to various other day activities to help those in need. In charge of organizing multiple “Day of Carings” on the North Side, as well as his team partnering with United Way, Dan helped the community to fill those gapping holes felt by so many, and got to go above and beyond to continue in making this community better. He found it incredibly important that the United Way created a strong partnership with our community and provided important services. He was lucky enough to see and experience the number of lives that United Way helps and the safety net that was created still exists today first hand.

Being such a huge contributor to the United Way, Dan explains that he wishes that the general public had a better understanding of all of the programs that Untied Way, itself, offers and the amount of lives they touch. He continues on to say that if it weren’t for the United Way, many problems would fall through the cracks, as it truly is a safety net for Allegheny County and the more people that about United Way and how it helps the community, the better.

Working at Highmark, a huge part of Dan’s job is to get employees engaged in the community. “United Way is a one stop shop, and as a Tocqueville member that contributes or donates $10,000 or more, you know you have the flexibility to do things with your donation that supports our community in a variety of ways,” Dan explains. He loves the fact that through the United Way, you can earmark your donation to specific organizations, you can designate some and give to United Way’s Impact Fund, or put all of it towards United Way’s Impact Fund, where United Way assesses the needs of the community to implement and create programs and initiatives to help our people; all of which are great options where the money is getting to the people that need it most. “As a Tocqueville member,” Dan explains, “your donation is teaming up with others’ contributions and making a bigger impact together.” Dan truly believes that being a part of a network of leaders in the Greater Pittsburgh community of Allegheny County allows you to take advantage of collectively seeing the good will and deeds others are doing while learning best practices from each other and their companies.

Speaking to his favorite experiences through the United Way, Dan shares his nostalgic love for his early on experience with Days of Caring. “They were a lot of fun for all those that participated,” Dan recalls, “and great things happened through those that donated their time. “ Allowing your employees to volunteer together, they can build camaraderie with their fellow peers and see the end product and work with those that are directly benefit from these nonprofit centers. “It was a day of volunteering that actually offered a first hand impactful experience for all of those involved.” Another one of Dan’s United Way favorites is back when he was County Executive. “It was September of 2004 and Hurricane Ivan passed through and damaged over 4000 homes throughout the county,” he remembered. Dan oversaw repairs and clean up and was able to see first hand emergency services and United Way working side by side. Everyone pitched in and helped where the needs were. Reflecting on the work accomplished, Dan explains that the United Way was a large and important partner at the time. Describing the moment as fulfilling, he was impassioned by the idea of an elected official helping and watching the Pittsburgh community work together in extreme devastation. “If it wasn’t for United Way, some of those services that were provided would have never been possible,” he concludes.

As his interview comes to a close, Dan speaks a few closing words, explain that “in addition to being part of the Tocqueville Society, which has been extremely rewarding, I am in a unique position to oversee the general Highmark and United Way partnership in our community. “ Consistently trying to get more people involved and to support our community, Highmark has a great track record and corporate match that continues to grow from the Tocqueville giving levels on down. Dan emphasizes the importance that our overall giving represents whatever someone can afford, and that is helping each other, our neighbors, and our friends whether that is through giving $10 or $10,000. We both share the same infrastructure, and that is to have an immediate impact on those lives in our communities.