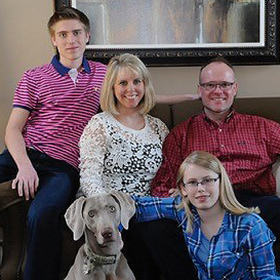 A Dollar Makes a Difference

With a demanding job and two children, living a busy lifestyle is nothing new to Elizabeth Terrell. Elizabeth and her husband Hank have two children, 16-year-old Travis and 13-year-old Julia. As if raising two teenage kids and working full time for UPS doesn’t put enough on her plate, constant relocation just happens to be a large component of her job. Though some people might find the task of continually moving daunting, Elizabeth and her family enjoy experiencing different places and exploring what each location offers. Beyond widening their cultural horizons, Elizabeth feels as though all of their traveling has ultimately made their family closer, explaining that, “we are a pretty tight family unit and we stick together because we typically don’t know anyone where we are moving.” Now relocated to Pittsburgh, Elizabeth has become a Tocqueville member of the United Way, crediting her past for the values and principles she has today that led her to give back.

Growing up, Elizabeth didn’t have much; living in a house with four siblings can be tough, and with both of her parents being self-employed, money was not something that grew on trees. Throughout her childhood, Elizabeth and her family had to work hard to make ends meet, which created a very real understanding of what it took to keep up with the bills and a household at a young age. “As a child I had a very keen understanding of a dollar,” Elizabeth explains, her philosophy being that your own contributions were what made the difference.Sharing a belief with the United Way very early on, Elizabeth knew that a dollar is a difference maker, motivating her to work hard throughout her childhood. Selling firewood to earn extra money for the household instilled a desire to work hard that still resides with her today.

Elizabeth moved out of her home by the age of 17 hoping to get an education and a good job, and quickly found that she was working for very different reasons than most teenagers. After a few years of working hard, she was hired for a part-time position at UPS, her first real job. After a few years of working for the company, Elizabeth was told that to move up in her career she would have to relocate, which is something she and her husband were willing to do. Now, after working at UPS for 22 years, her relationship with her career remains strong because her values align with the company’s. “UPS cares very much about the community, their people, a hard work ethic, and education, and all of those things are important to me,” Elizabeth explains.

Through their similar values, UPS provided the push that first got Elizabeth to donate to the United Way. “When I first started donating, I was part-time at UPS and every nickel meant a lot to me,” she explained. “The manager came to me, said this is what we do, fill out your pledge card and be done.” Not having two nickels to rub together, Elizabeth began questioning how she could help someone else with the little that she had.

After progressing through the company, a manager for UPS took a group to the Bethel Baptist Church, a safe house for crack babies. Pregnant women who were on drugs would bring their infants to the church, and there, women would rock crying babies all day and night until the child was weaned off of the drug. This act personally touched Elizabeth, saying, “I found myself thinking, where would these babies go if not for these ladies?” The experience changed her, and Elizabeth left the church with a new mindset: whatever I can give, I will give.

After her experience at the church, Elizabeth and her family continued to move around to accommodate her job for UPS. While living in other cities, Elizabeth was involved in the Women’s Leadership Council through the United Way, finding it a “great way for women to meet each other in a professional environment.” Describing the council as an “invaluable network of women,” Elizabeth cherished finding women who were likeminded in issues they found important. Though most of the women, herself included, worked full-time, they still cared greatly about the community. “I’m busy, you’re busy, but we can still make time to do what’s right,” she elaborated, dubbing the experience “inspiring.” Still in touch with some of the women to this day, she shares that her only regret was not starting sooner.

From her positive experiences through the United Way, Elizabeth emphasizes her love of how much the philanthropy really cares. “You guys work very hard and I see the commitment and heart that goes into it,” she raves, “I see the care that goes into selecting the agencies and delegating the money… I’m glad you guys are doing the research because I wouldn’t even know where to start.” Reverting back to her childhood values, Elizabeth explains the philosophy that she shares with the United Way: a dollar makes a difference.

As a newcomer to the Tocqueville community, she explains that “at the end of the day when I got involved with the campaign and I really started understanding the value of a dollar and how blessed I am with my family, I really [started to] feel strongly about giving back.” Elizabeth cites the female speakers at the Tocqueville events who have inspired her further to meet the strength of others and find strength in herself is an experience she has found extremely humbling. “I love the incredible stories and the incredible way that people have overcome things,” says Elizabeth, further explaining how she has never failed to attend an event that didn’t leave her inspired.
Coming a full 360 degrees from her life as a child, Elizabeth feels blessed to be where she is today, which only strengthens her passion for giving. Her core values and morals developed in her childhood led her to a rewarding career, and a passionate involvement with the United Way. Ending her interview with a sincere thank you and a humble statement, she leaves us saying “I appreciate all you do and I try to do as much as I can.”


Taking Care of Her Own