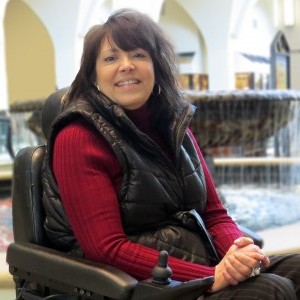 Jan Martin was devastated when her fiancé moved out of their apartment and left her with a stack of unpaid rent and utility bills. She is a college graduate and worked almost all of her adult life, despite a spinal cord injury that’s confined her to a wheelchair since her teens.

Jan’s fiancé was a Navy Veteran.  Over time his untreated PTSD began to interfere with his business and eventually destroyed their finances.  He left Jan facing eviction and she couldn’t afford groceries. Thanks to the assistance Jan received from a program funded by United for Women, Jan is now current with her bills and has moved to a smaller apartment she can afford. “It was such a shock to realize I could be homeless,” she says. “I never thought that could happen to me.”

Finding balance in life and work