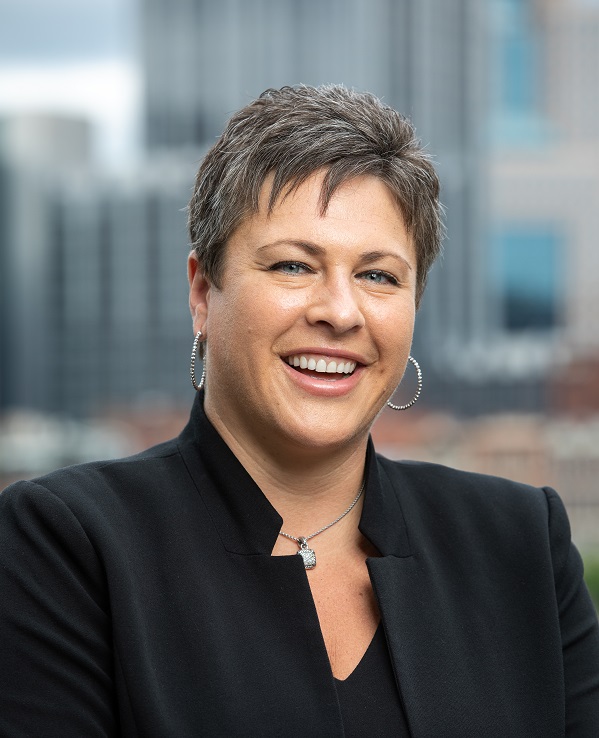 Helping others through her love of people

Monica Stanton is a manager at First National Bank, for both the downtown and Hill District offices. She’s been with First National for seven years handling consumer lending, but Monica says the best part of her job is building trust, respect, and relationships with her clients. Monica has lived in the North Side for the last four years.

I went to Robert Morris University to get a finance degree. I thought I wanted to be a stockbroker, but I wasn’t interested in the potentially crazy lifestyle that might bring, so I decided to go into banking. My dad was in banking for 40 years. I’ve been lucky that it’s a natural fit — I love people, and I have a math background. I thank my lucky stars that this is where I ended up, because it feels like exactly where I should be.

Are you native to Pittsburgh?

I grew up in Meadville, PA and attended high school there, then went to Robert Morris for college and have been in Pittsburgh ever since. I lived in Shadyside for about eight years, and then about four years ago I bought a house in the North Side. I like being in the city of Pittsburgh. I’m less than 10 minutes from downtown, but I still have all the aspects of living further out, including seeing deer and turkey. I live on a quiet street with woods behind me, so I really get the best of both worlds.

What are your hobbies?

My parents have a place on Conneaut Lake, close to Meadville. It’s only an hour and a half from Pittsburgh, but it’s a different world. I love going to the lake, boating, being on the water, and being with my friends up there. I also love volunteering, and a lot of my time is spent volunteering with different organizations. I’m in a rotary club and do a lot of community service events with them. Plus, I’m involved with the chamber of commerce, I’m on United Way’s Games for Good committee, and I’m a big sister with Big Brothers Big Sisters. I also love reading — I could just sit out in the sun and read a book forever.

What was one great thing you did this summer?

I went to Germany. I’m not a huge traveler, so it was very out of the norm for me. My boyfriend’s daughter studied abroad there and we went over to meet her and bring her back. We saw a lot of the country and did lots of sightseeing. We started in Freiburg, then drove through the Black Forest, went to Ulm, up to Munich and on. We had places we wanted to see but the rest of the trip was spontaneous, just doing whatever we wanted to do. It was great.

How did you get involved with United Way?

I got involved through First National Bank. Our CEO is on United Way’s Board of Directors, and stepped up to sponsor the 2017 Games for Good volunteer event. They asked for somebody from First National to be on the committee to help with the event, and I was contacted by my regional banking director to volunteer. I’ve been involved every year since then, and I really enjoy it. Through that event, I got to know more about United Way, and now I try to attend every event I can. I’ve done two Hoodies for the Holidays events, and I’ve joined the Bridges Society. I may have been introduced to United Way through work, but I’ve taken it upon myself to get more involved and spread the word to others.

I think about this a lot. I volunteer with a lot of organizations but I think the United Way really sticks out. They’re in touch with what’s going on in our community, they know what attracts and engages young adults and how they want to be communicated with, and they’re good at getting people involved. I’ve been on boards where they always have the same ideas floating around, but with United Way there are always fresh ideas and new things going on, and they always want to know how things are going and how they can make things better. That’s very inspiring to me.

What is your favorite United Way memory?

It was last year at the Games for Good event. Everything was running smoothly, and as I looked around I saw one of our directors at First National Bank playing with some kids. He’s 6’4”, and he was holding a hula hoop and kids were dunking basketballs into the hula hoop because he’s so tall. The kids were just having the time of their lives. Watching him with the kids like that gave me the chance to see a different side to one of my colleagues. It was so simple, but so impactful. I loved seeing how happy the kids were, too — it was the perfect example of what that event was designed to be.