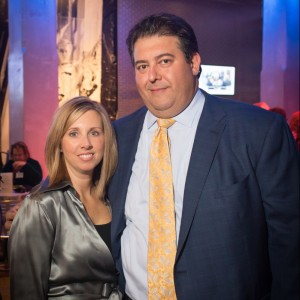 If You’re Not Participating, You’re Missing Out

“For many years, I didn’t understand the concept behind the Tocqueville Society.  If I had known earlier, I’d have gotten involved sooner.”

You never know when a good suggestion will change your life.  Twenty years ago, Glenn Todd’s law school counselor suggested that he should arrange a personal interview in connection with his application to Georgetown University’s LL.M program in Taxation.  “That was back when we had to use maps,” Glenn laughs as he remembers the drive from Ohio, his big dog beside him.  His interviewer mentioned that Georgetown had internship opportunities at the Council on State Taxation (COST), an organization that supports major companies around state tax policy issues.  After completing that internship and attaining his Masters, Glenn joined one of the supporters of COST, KPMG LLP.  Now the Partner in Charge of KPMG’s Tax Practice in Pittsburgh, Glenn still marvels at how his career path unfurled from his counselor’s advice.

Glenn followed more good advice when he became a United Way supporter early in his career. “I don’t remember when, but a shift definitely occurred,” he says. “At first you get involved with United Way because your firm believes in it. You don’t know the value, so you trust what you’re told. But at some point, when you really understand everything that the organization is doing, you actively want to support it.” Volunteering at United Way facilitated that shift for Glenn. He served as a financial reviewer during several RFP cycles and currently is a member of the Impact Committee. “I learn something new about what United Way does at every meeting. The breadth of initiatives and supports, how the funding works, the deep analysis that goes into awards—it’s eye-opening.” He encourages his younger colleagues to go through that same growth process, so they can “see how good it makes you feel, to be part of what United Way is trying to accomplish.”

As a Tocqueville Society donor and Tocqueville Committee member, Glenn recommends Tocqueville membership to colleagues inside and outside his firm. Now that he’s experienced the value of membership, he wishes he’d joined sooner. He encourages up-and-coming corporate leaders to take advantage of the Step-Up program, which makes membership more accessible. “The Tocqueville experience is special,” he says. “It’s a best practice concept to get top donors together in interesting locations to network and support the community.  Charitable giving is always the right thing to do, but the Tocqueville Society gives you so much in return.”  Unlike most traditional fundraisers, “There’s no solicitation at Tocqueville events.  The tone is appreciative.  I walk away thinking, ‘What more can I do? How else can I contribute?’ because it feels so good to be there.”

Glenn and his wife, Stephanie, met one summer during college and have four children ages 12 to 18. With a smile, Glenn explains how they came to live in Cranberry when his work brought them back to Pittsburgh: “She grew up in Wexford, in the far North, and I grew up in the Mon Valley, in the far South. So we compromised, and live in the North.” The Todds feel fortunate to have grown up and made their home in such a great community for philanthropy and giving back. They share a passion for reaching out to help others. Stephanie, a former teacher, is particularly committed to programs that meet the needs of young children. “I like knowing that in some way I’m helping children grow and work toward their dreams,” she says.

Glenn attributes much of Pittsburgh’s economic rebirth to the philanthropic investments of its civic-minded business and community leaders. United Way plays a critical role in maintaining that tradition. “As members of the community, it makes sense to want those living around us to have the help they need,” Stephanie says, and Glenn agrees. “The challenge is for the next generation to pick up that torch, with that same mindset.  I’m confident that will happen, if they just get involved,” he says. “I believe they will.”