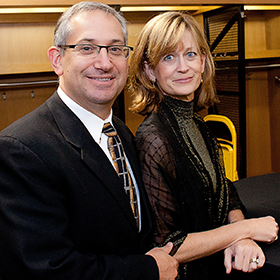 Giving Back in the Most Livable City

Growing up in Bronx, New York, Pittsburgh seemed mild in comparison to the steel playground John Rosso grew up in. Little did he know, Pittsburgh is exactly where he would be spending the majority of his adult life with his wife and four children. After meeting his wife, Catherine, of 27 years at a mutual friend’s New Years Eve party in 1981, the two New Yorker’s desire to start a family led them to what is dubbed “the most livable city”- Pittsburgh, Pennsylvania. This title meant a lot to Catherine and John, and it became Rosso’s first tie to the United Way. “I think the work that is done in the community certainly leads and lends to that happening,” Rosso explains, speaking about Pittsburgh’s impressive label. Admitting that a huge reason why he and his family ended up in Pittsburgh is because of its livability, he credits much of those components to the United Way. Now having raised all of his four children in Pittsburgh, he can attest to Pittsburgh’s great qualities that truly prove it deserves the name.

After working for IBM for so many years, Rosso decided to branch off to start his own business. Because IBM was his connection to the United Way, breaking ties with IBM resulted in a temporary break in ties with the philanthropy as well. It was not until he was re-introduced to the philanthropy and reminded of his good memories with the United Way that he involved himself once again. Now that he has been associated with the United Way for many years, he has become an active giver and supporter of the causes closest to him.

During his involvement with the philanthropy, Rosso was encouraged by a Tocqueville member to explore his options in the community. Never having heard of Tocqueville, Rosso decided to explore a Tocqueville membership, and once again got re-engaged. Rosso maintains that the Tocqueville society gave him a personal understanding of what the United Way is and does, explaining it with an interesting analogy. He rationalizes Pittsburgh as being a fish tank, the fish being its inhabitants and companies and the water being its environment. Just like a fish tank, if you don’t take care of the fish and keep the water clean, the fish die. “The United Way provides environment (clean water) for Pittsburgh to thrive,” Rosso explains. “If United Way of Allegheny County ceased to exist, there could be a potential deficit of $15-$20 million dollars that go into the community.”

He wants the community of Pittsburgh to know how the United Way brings the collaboration necessary in the community by providing the givers, the volunteers and those in need. By connecting those networks, the philanthropy is raising the bar and raising the standard of expectations of services provided and the outcomes delivered.

Using another analogy he explains that, “if $1 was going into philanthropy, because United Way is structured the way it is, we are essentially tripling the value of that dollar. To me that’s a worthwhile way to look at the organization.” Rosso goes on to stress that more people need to understand how United Way works and the needs of the community we live in so we can increase the community’s understanding of the need for the United Way. As John Rosso would describe the situation, “the fish doesn’t realize they are in water until the water goes bad.” Believing that this is just a start, he concludes that “ the more we learn, the more we will support.”

After explaining the benefits of supporting the United Way, Rosso went on to share his favorite parts of being a Tocqueville member. Describing many of the people he has met through the program as “smart, visionary and generous,” he credits most of these interactions to the Tocqueville campaign kickoff events. Raving about the exciting venues and it collaboration of the business and social communities, he describes the overall atmosphere as optimistic. “Philanthropy blesses the giver even more than the receiver,” he explains, “it gives you a chance to really understand the needs of the community.” Describing the positive and optimistic perspective on life and gratitude giving back has blessed him with, he explains that contributing to the United Way is the “healthy way to go.” Encouraging potential Tocqueville members to have an exploratory meeting to further understand what the United Way does, he describes the United Way as an “efficient vehicle” to helping the community.

Rosso concluded his interview on the note that he started, describing how the United Way helps community thrive and become a place where, like Rosso, people want to come to raise families and live. By getting involved with the United Way, Rosso is directly keeping Pittsburgh’s title just the way he likes it- the most livable city.