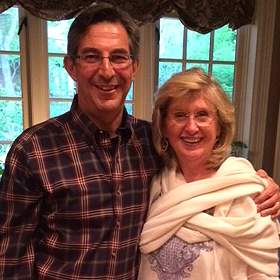 How One Woman Involves Herself in the Pittsburgh Community

After meeting her army husband in Washington DC and spending her young adult life moving around the United States and raising two children, Kathy Testoni is no stranger to hard work or dedication. Having moved 22 times in her lifetime, Kathy and her husband, Lou, finally decided to settle down in a city they could call home- Pittsburgh. Recently celebrating their 40th anniversary, the couple is now happily settled near downtown, living near their two children.

Lou was born and raised in Rhode Island, while Kathy lived all around the United States, including Pittsburgh twice. After their wedding in Pittsburgh in 1974, Lou fell in love with the city and vowed to return, a wish that came true when he began working for PricewaterhouseCoopers. Falling deeper in love with the friendly people and give-back atmosphere in Pittsburgh the longer they lived in the city, the couple got more and more involved in the community.

When living in DC, both Kathy and Lou worked while taking care of their two children. Because of their busy lifestyle, they weren’t able to be too involved in community efforts. When the family first came to Pittsburgh, Kathy left her job, which gave her more time to get involved in the community. Kathy became a volunteer in the school system, which ultimately led to other volunteer activities like Boy and Girl Scouts.When her children got older Kathy felt the need to branch out and get more involved. Due to her children’s medical needs, Kathy turned to volunteer work involving gardens to relax and relieve her stress.

Becoming more and more integrated into the volunteer community, Kathy found herself volunteering for a multitude of different organizations, including The Epilepsy Foundation, The ARCS Foundation, and organizations that teach underprivileged women how to garden. Describing all of these opportunities as “tremendously rewarding,” Kathy didn’t stop giving back there. Seeing the empathy and passion she has for the disability community of Pittsburgh, Kathy was asked by United Way to join the 21andAble effort, a program created to help young people with disabilities make a successful transition to adulthood. Loving being able to see first hand what our county has to offer, she is increasingly impressed by the hundreds and hundreds of hardworking people trying to help individuals that have these needs. Her passion shining through her interview as she gushes about the nonprofits she works so hard for, she shows her intense desire to help the community when she explains that “whether there was a Tocqueville Society or not, we would still be involved.” Describing working with the United Way as “an honor” and “impactful,” Kathy is comforted by the fact that, especially through the United Way of Allegheny County, she knows where her dollars are going and that they will be to be put to good use. She concludes her thought by saying that “to be involved with this organization and what it stands for truly exemplifies the community as a whole.”

When asked about her favorite event, she falls silent before expressing her difficulty to choose. Finally deciding on the most recent Heinz Award volunteer recognition event which honors the spirit of volunteerism in Allegheny County, she emphasizes the level to which she was impressed by the event, commenting on the speaker and the great, impassioned people she met.
Describing philanthropy in Pittsburgh as “astounding,” she goes on to explain that the “number of foundations we have percentage-wise compared to our population, and compare that to other cities in the United States…Pittsburgh has to be in the top five.”

Concluding her interview on a positive note, she emphasizes her excitement over Pittsburgh’s involvement in its own community, and the crossover she is beginning to see between separate philanthropies. “They all have their own mission but I’ve been seeing a little more of a crossover,” she explains, “everyone is starting to work together, and I love that.”