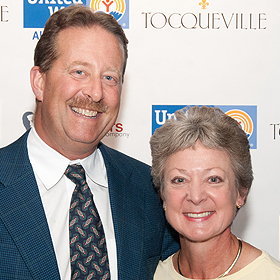 Born and raised in Pennsylvania, Kim Fleming took a small jump to Illinois to attend Northwestern University for physical therapy. After changing her major to economics with a specialty in finance and meeting her husband, Curt, at school, the two then took a big jump to San Francisco, California. They happily lived there for six years , working and pursuing additional education. After considering long-term plans including where they would want to raise their family, the couple moved back to Pennsylvania to fulfill Kim’s interests in working for the family business. In 1987, the couple made the big move to Pittsburgh, the city they are proud to call home. Their two sons are now grown – one is working as the 4th generation at the family business with Kim, and the other is studying economics at Allegheny College.

Kim and Curt love the Pittsburgh community, and Kim feels blessed for the life she lives and for the opportunity she had to work in the family business with her father, a man she says was a great mentor, leader and a memorable man. Highly respected and great with people, her father is credited with teaching Kim the importance of making and keeping relationships and working in the community. Kim’s mother is still very active in the community and sets an example of philanthropy for the family.

Believing her sense of community came from her tight-knit family, Kim feels blessed to have been able to know and love all four of her grandparents, all of whom taught her incredibly important life lessons. Two of her grandparents were open, warm and friendly to strangers and friends alike, while her other two grandparents were quieter and taught her many lessons about values and life in general. She was taught that life is about relationships and community. These values and morals pushed her to give back in unimaginable ways. In 2003, Kim went on a mission trip to Malawi, bringing food and medical supplies to a community greatly in need. “At the time, it was the second poorest country in the world,” she explained, “and people who had absolutely nothing were so welcoming and appreciative. It really makes you grateful for what you have.”

This experience was one that Kim found life-changing, and she has since gone on several more mission trips. She is passionate about the meaningful experiences of giving back. “I consistently come away from these trips having received much more than I gave,” she explains, believing that volunteering can feed you in ways almost nothing else can. “Once you have experienced helping others, you then feel a need for it,” she says humbly.

Looking for ways Hefren-Tillotson could get more involved in Pittsburgh, they began the annual Hefren-Tillotson volunteer day at the Greater Pittsburgh Community Food Bank. While joining the United Way for a hands-on Day of Caring at Gwen’s Girls, they also formed relationships with the agency and United Way in ways that have become very important. While attending a Hefren-Tillotson United Way campaign event, Kim had reached a point in her career that felt like she could give at a leadership level. Shortly after stepping up to a leadership position, she met a man at a leadership charity event who shook her hand and said, “I am so glad to meet you, you are really going to make a difference.” This interaction is something that stuck with Kim, and a year later, she decided to find the man and give him a phone call. After a brief conversation, the two met for breakfast, and the man whom Kim describes as a “great giver to the community” shared his experience, explaining how the United Way makes an impact on the community. “After that, I decided to step up to Tocqueville,” Kim continued, “you need to give to things that are meaningful to you but also give to others. He inspired me to step up to that level.” Kim is excited by the incredible, passionate leaders she has met through the Tocqueville Society and the Women’s Leadership Council and is energized in seeing philanthropy grow and impact our community.

When asked what she would say to someone who is considering joining the Tocqueville Society, Kim has a simple three-word message: Just do it. Being a big believer in giving back and being grateful for what you have, Kim emphasizes the huge difference that donations make in both the community and in the donor personally. Believing the community needs to be aware of just how many people are in need, she knows that sharing what we have with others and watching them benefit is a life changing experience. “In my field, I’ve been able to see people who are able to give, witness their transformation, and watch them see the difference that they can make,” Kim relays, concluding her thought by explaining that “There is so much in the world to give thanks for, we can really make a difference in people’s lives. We want to give while we are still here to see the benefits.”

Impressed by the United Way’s ability to focus on the most important issues, Kim urges readers to get involved. Recalling her fondest memories, Kim explains that her favorite events are the United Way campaign activities because of the creativity and energy fueled by the strong common goal of a good cause. “I would encourage emerging leaders to give more than you think you can. It’s amazing how it comes back to you.” Kim ends her interview with some easy advice: “It doesn’t really matter how much you give, just give something, and get involved.”