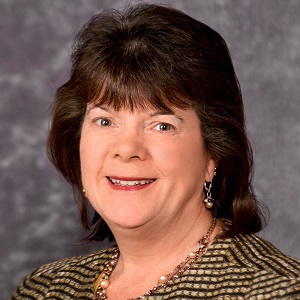 Making the Most of Every Moment

“I get so much out of the Tocqueville Society. Volunteer events, interaction with people, and knowing that my money is being directed to the right place.”

Molly Crooks is committed to making the most of her life. The chance to interact with other people is what gets her up every day.

After losing her mother suddenly at the age of 15, Molly learned many of life’s toughest lessons. “I had to learn how to multitask very quickly. It made me a stronger, better person. You have to pull every fiber in your body to get through it. Then you realize you can do anything,” she said.

Six  years later, Molly married her high school sweetheart, Tom. The couple reside in Washington County, where they raised their two sons, Randy and Kevin. “They are the loves and joys of our lives.”

After seeing the way UPMC Presbyterian staff cared for her mother, Molly knew she wanted to work for the company. Her career at UPMC began 28 years ago. “I knew when I had the opportunity to work for UPMC what a special place it was,” she reflected.

Since her early professional years, she’s been a faithful donor to United Way. She served as the UPMC campaign chairperson for United Way’s annual workplace campaign for 10 years. It was gratifying for her to reach out to every business unit, get to know her co-workers, and see the charitable spirit of the organization. One of the most rewarding aspects was knowing “people right beside us benefit from the services,” she said.

Inspired by her work with UPMC’s workplace campaign, Molly began to get involved in more specific areas of United Way’s work, like the Women’s Leadership Council and United for Women. She began to see that needs in the community aren’t going away, they are only getting bigger.

She was eventually approached by a colleague to consider the impact she’d make if she made a Tocqueville Society-level gift. She said the conversation gave her “cause for a pause,” and she quickly realized it was the right thing to do.

Molly wants as many people as possible to know about United Way’s multitude of services, as a crisis, tragedy or difficult situation could touch any of us. She’s inspired by how United Way sees a void in the community and fills it. As a former Certified Public Accountant (CPA), , she also respects that United Way is one of the most efficiently run nonprofit organizations, having received a 4-star rating from Charity Navigator for the past six years.

In addition to her involvement with United Way, Molly mentors 6 – 10 young professionals at UPMC by regularly having lunch with them, discussing work/life balance, and helping young moms return to work. Molly asked for flexibility to raise her family early in her career, which she described as a risk at that time. However, she tells working moms, “It doesn’t have to be all or nothing.”

Molly and her husband spend a lot of time involved in community agencies that are of great importance to them including, for example,  the YMCA by officiating swim meets across the region, following their sons’ involvement on community swim teams growing up.  “We want the community programs to be as available to other families across the region as they were for our family when our boys were growing up,” she said.

“I realized there are lots of people I can help. Not just financially, but as a mentor, teacher, and friend,” said Molly.

The couple surround themselves with friends who are also active in their communities. She described the importance of working together. “We might be only one or two people, but if we join forces with others, we can really have an impact.”