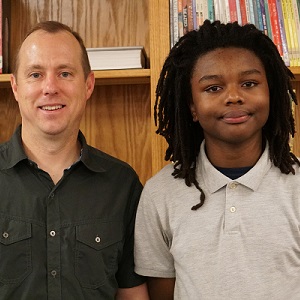 Mentoring is About Being There

“Mentoring is about just being there. It’s important that he knows I will show up and follow through.”

Since David first started volunteering with United Way’s Be A Middle School Mentor program two years ago, he has learned a lot about what it means to be a mentor. As the in-house attorney for Bank of America, David found it easy to get involved because of his office’s convenient location right across the street from Pittsburgh King PreK-8.

“I wanted to get involved in the community,” David says. “I’d never done anything like mentoring before, so I was a little apprehensive. In hindsight, there was absolutely nothing to be worried about.”

David, a sports fan, was matched with Josh, a 7th grader who is into art and music. The two took time to understand each other’s interests and build common ground. “At first it was hard to find things to talk about,” David says. “It was work for the first couple sessions, but then you get to the point where it’s not anymore.”

Now, David and Josh talk about a lot of things – family, how Josh is doing in school, his art and video games. They even have running jokes between the two of them. “Josh wins everything – UNO, raffles, dance-offs,” David says.

In mentoring sessions, they focus on how to approach studying, helping Josh carve out time for homework before starting to watch TV, play games or do chores at home. “My goal is to be a positive influence,” he says. “I don’t go into the sessions with a set plan to teach life lessons. And Josh directs most of the conversation based on what he needs help with.”

This year, David is supporting Josh as he faces the challenge of preparing for high school. Josh wants to get into CAPA with his art – he does anime graphic story illustration that David says is incredible. David is right there with Josh as he explores his options for next year.

David understands that mentoring is about being there for Josh. Once, he was running a few minutes late for a mentoring session. As he was coming in, he overheard Josh say to his friend, “Don’t worry, he’ll be here.”

“It feels great to know that we’ve built up that much trust,” David says. He hopes to continue a relationship with Josh as he moves into high school.

Learn more about how you can Be A Middle School Mentor, at uwswpa.org/be-a-middle-school-mentor.

Do whatever little you can