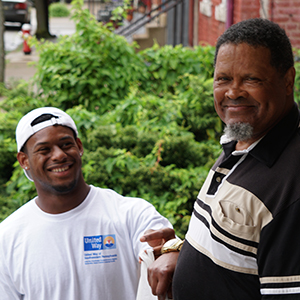 One donation changed the life of a local senior

One donor changes the life of a local senior

76-year-old Earl Russel had been visited at his Northside home by Meals on Wheels (a United Way funded agency) for just over a year. Caring delivery workers brought him meals and often came in to chat or even help Earl with small projects.   When the batteries on Earl’s wheelchair died Earl began saving everything he could to make the $400 repair. One day, when Meals on Wheels staff were scheduled to visit, Earl was surprised by Pittsburgh Steelers player JuJu Smith-Schuster.  “I was so thankful to meet him,” Earl explained. “He asked how I get around, and I told him about the batteries on my wheelchair. He just turned to me and said, ‘Gotcha,’ and offered to pay to replace them.”   Through a donation to United Way, JuJu contributed the $400 to repair Earl’s wheelchair. “It’s a blessing for him to come and do that for me. I appreciate it so much,” Earl said. Now, Earl is able to get around his neighborhood better, make short trips to the grocery store, and even go Downtown. He tries to watch every Steeler game so he can cheer on his new-found friend.   “When I used to work at the drug store growing up, I always gave some of my earnings to United Way – it felt like the right thing to do,” Earl remembered. “Now, they’ve done so much for me, and I am so thankful.” “The help I received from United Way has had an unbelievable impact.”