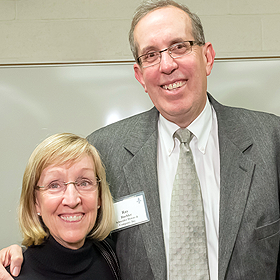 A Passion for Giving

Business Success Leads One Man to Give Back

Growing up in the South Hills of Pittsburgh, Ray Buehler has lived a busy yet fulfilling life, recently becoming the 2014 United Way Campaign Chair. Though his wife Kathy grew up nearby in Elizabeth Township, they did not have the pleasure of meeting until they were both students at the University of Notre Dame in South Bend, IN. A few years after being married, the Buehler family grew as Ray and Kathy welcomed daughters Lindsay and Kathleen. After attending school in Upper St. Clair, the two daughters both carried on the family legacy and went on to continue their scholastic career at Notre Dame.

Since their days living in Upper St. Clair, the Buehler family has relocated. Lindsay, who is married to Brian, now resides in New York City, NY, while Kathleen currently lives in Dallas, TX. This time around, Ray and Kathy are following in their daughter’s footsteps; now married 37 years, the couple has since relocated to downtown Pittsburgh. After thirty years of living in Upper St. Clair, Ray explains that “we have a marvelous network of friends still in Upper St. Clair, but we’re going to try out the downtown living at this point and see how that goes for the next few years.”

Ray’s path to achievement has been a long one, but his success story proved to be extremely rewarding for him and his family. He explains that, “Some of life is lucky. I had decided to go to grad school after college and was set to do that. An individual influenced me in the summer of 1975 and I deferred grad school. It was at that point that I wandered through the door of Schneider Downs intending to work only for one year.” That one year turned into 38, for he has not set foot outside the company since. After working at Schneider Downs, a 22-employee accounting firm, for nine years, Ray was selected to be co-managing shareholder. Though nine years is an accomplishment, it seems small in comparison to the 38 years he has now worked for the company. In his 38 years of employment there, Schneider Downs has grown from a small, 22-employee company, to a fully established accounting firm housing 370 employees and two offices.

As Chairman of Schneider Downs, an accounting firm with a current client list of Fortune 500 companies, Ray has a keen understanding of finances and expenses. Through his work with many non-profit organizations, Ray also appreciates the region’s charitable landscape. “I’ve always recognized that the need is enormous.”

Ray notes that “the United Way is the heartbeat of this city. It’s where the needs are matched up with the dollars.” Ray has been a long-standing Tocqueville donor for many years, and in doing so has become an integral part of the United Way’s corporate leadership.

While both Ray and Schneider Downs have made a tradition of giving, Ray understands certain realities surrounding donations and the community’s needs. “The need is enormous, and ultimately there is a limit, whatever the big number is, there’s only so many dollars to go around.” Ray knows that questions must be answered such as “How can I be effective and efficient with this spend? How can I maximize my individual and company investments?”

With this awareness, the Buehlers have generously supported United Way throughout the years. “Fortunately, we have a nice long history with United Way,” said Ray; a history that established its foundation in Ray’s early leadership role at Schneider Downs and has since continued thanks to the Schneider Down’s generous tradition.

Urging others to get involved, Ray shares his philosophy about bettering the Pittsburgh community saying, “Where can you get your most effective use of the dollars -I believe it’s United Way. When you see United Way combining nonprofits with joint ventures you know your investments are being maximized.”

For Ray, much of United Way’s success stems from its leadership. Much like Schneider Downs, Ray remarks that United Way leadership “care[s] for what they do every day, care[s] for their effectiveness every day, and care[s] about the product that they are delivering every day.” Ray feels the United Way’s leadership has touched him, personally, because he knows their heart is in the right place. Believing fully that everything and everyone has a total lifetime commitment, he has complete confidence in the management team inside United Way.

Sharing some key life advice, Ray says to begin younger. “If I could do it all over again, I would start younger… I wouldn’t worry about how much can you contribute, I would get involved early and give what you can.” Expressing passionately that every dollar helps make the Pittsburgh community a better place, he shares his beliefs that those who have success have a social responsibility to give back to the community. “While I cannot foretell the future, I am confident that the next generation of leadership at Schneider Downs will see our commitment to United Way as foundational to who we are and what we do.”

United Way is extremely excited to welcome Ray as our inaugural Tocqueville Spotlight Series interviewee and look forward to working with him as our 2014 Campaign Chair.