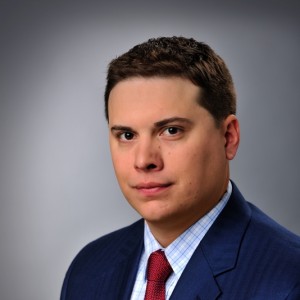 Stepping Up: Opening the Door to Philanthropy

Brendan Surma was a “freshly-minted marketing professional” with PPG when he made his first donation to United Way during the 2009 workplace campaign. Now managing a variety of commercial and technical initiatives, Brendan leads PPG’s Performance Glass Coatings business.  He’s also expanded his participation with United Way: he’s served on United Way’s Millennial Steering Committee and volunteered as a proposal reviewer in United Way’s most recent competitive funding process. As “a younger Tocqueville guy,” he’s now a member of United Way’s Emerging Leaders Tocqueville Committee. And this year, he’s encouraging his coworkers to support United Way as a member of PPG’s campaign team.

Brendan describes his involvement with United Way as “a graduated engagement strategy: from no gift to some gift, from some participation to committee participation, and now Tocqueville participation. There’s always been something there for me. At each level of participation I’ve come away with a greater understanding and appreciation for the people in our region that we serve every day.” Brendan got an insider’s perspective on community impact as a volunteer proposal reviewer in the Helping Families THRIVE funding area: “I saw the process from the ground up, from the individual service providers saying ‘these are the people we’re going to serve, this is how many, and this is why it’s so important.’ Now if a coworker asks, ‘Why should I give a leadership gift?’ I can say, ‘We have workforce development issues that require attention right away. That’s just one reason why you should give.’”

As a business professional Brendan understands that superior innovation must be relevant, not just new. That’s why he supports United Way. “One of my mentors, and somebody I really look up to, is Bob Nelkin. I’ve heard him say, ‘Think about your hero, or someone you love or care about. If they were in trouble, what would you do to help them?’” Brendan’s drawn to the urgency that informs United Way’s work. “People we care about can be affected by the issues that United Way addresses. PA 2-1-1 Southwest and the various programs that United Way supports really make Allegheny County a better place for everyone.”

Brendan’s involvement with United Way dovetails well with his work. He enjoys the fast pace at PPG, “making decisions every day, and engaging from the operational to the strategic and everything in between.” After a Congressional internship during his time as an undergraduate at Georgetown University’s McDonough School of Business, Brendan “came to a decision point between working in industry to influence public policy or working in government.” He chose business, and finds that Tocqueville Society membership provides validating options for personal satisfaction and career development. “Besides having the personal reward of knowing that my gift goes directly to somebody who’s in need, by supporting PA 2-1-1 Southwest and United Way programs, the other reward as a Tocqueville member is the opportunity to work with senior business leaders and community leaders all the time. The ability to tackle important issues with senior executives of major companies in Pittsburgh, and having those connections, is invaluable.”

Brendan sees community involvement as part of his professional responsibility, and he’s encouraged to see other young professionals stepping up to participate with United Way.  Not all may think of themselves as philanthropists yet, but “volunteerism is really the key to opening the door to philanthropy later on,” Brendan says. “I think we all have a duty to volunteer our expertise. United Way staff are doing a great job connecting with emerging area professionals, by providing engaging programming to the Millennial Steering Committee and with the Bridges Society link. That kind of engagement communicates what philanthropy is all about, and why you should make philanthropic activity a part of your life.”

For Brendan, supporting United Way feels great and makes excellent sense. He contributes his time and skills on several charitable Boards, but he appreciates the difference he makes when United Way leverages his annual gift: “United Way gives me the chance to support quality programs across multiple impact areas and, at the same time, provide operational support to excellent agencies and organizations that I care about. It’s double dipping, in effect, and a great way to bundle your giving. Convenience plus results — that’s key.”