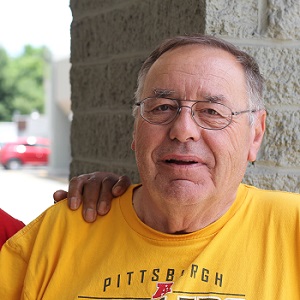 This volunteer driver is on a roll

Dick Donaldson had a long and storied career, from being signed to pitch in the minors for the Pittsburgh Pirates in 1959 to several decades as a truck driver. So when he retired, there was no chance he was going to sit still.

“I got bored and saw an ad for volunteer drivers in a local paper,” Dick says. “I thought ‘I like to drive, this could be just the thing.’”

So Dick began driving the free bus for seniors at North Hills Community Outreach and met a lot of interesting people along the way. One of those people, Harold Jordan, had recently sold his house, moved to a high rise and was recovering from hip replacement surgery. Dick began driving Harold to doctor appointments and errands through United Way’s Open Your Heart to a Senior initiative.

“We really connected,” Dick adds. “It’s neat to meet someone so interesting, with a lot of shared interests and experiences.

Dick and Harold’s driving trips turned into a friendship and now the two make regular outings together. In addition to trips to the Shop – n Save, the two have explored various neighborhoods in Western Pennsylvania.

“Harold is a fitness nut and got me into exercising,” Dick explains as an added bonus, “so we’ll take my dog, Sid, for walks. I’m getting healthier and Sid loves Harold.”

“I feel pretty doggone lucky at this stage of the game.” Dick says. And of his friendship with Harold, “it’s something I wasn’t expecting. It’s been good.”

This must be good for Dick. He’s been with Open Your Heart to a Senior as a volunteer now for 11 years.