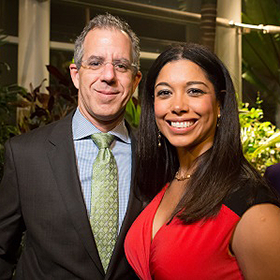 Give More, Get More

“By being a Tocqueville member, a person receives considerably more than they give.”

Todd Rosenfeld, CFP TM, a financial planner with Northwestern Mutual has always been a strong supporter of the United Way. When he first began his career after graduating from the University of Wisconsin, Todd recognized the United Way as a way to give back. “I’ve made United Way one of my primary focuses for my community involvement and dollars,” he says.

Family and community have always been important to Todd. His parents always found a way to give back, and he has instilled the value of philanthropy in his family – two daughters and significant other, Delilah Picart. United Way has created close ties between Todd and his family, and with the Pittsburgh community.

Through his involvement with United Way, Todd has made a difference and encourages others to do the same. Speaking to prospective Tocqueville members, he emphasizes his excitement about the opportunity to “spend time with like-minded people.”

United Way is lucky to have Todd serving in many different roles throughout the years. Todd is a former co-chair of the Emerging Leaders Tocqueville Committee (ELTC), and he now plays a major part in our grant funding process as a member of the Impact Cabinet, and of the Review Committee for 2017 United for Seniors agencies.

“When you get a chance to see the impact of the work and hear stories of people whose lives have been touched, it helps ground you,” he says. “It is a reminder of what a privilege it is to give back.”