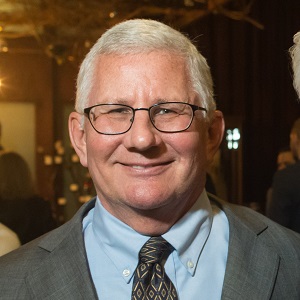 United Way board chairman devoted to paying his blessings forward

“We’ve considered ourselves to be blessed our entire lives. We’re paying it back through United Way.”

Jack Barbour has humble roots. He grew up on a farm in Mercer County. With a lot of hard work and dedication, he made his way through law school. He’s been a lawyer for 37 years.

Jack and his wife, Lisa, have four children, four grandchildren and one grandchild on the way. Because one of their grandchildren is severely mentally handicapped, they have a unique perspective on helping people with disabilities.

“Living through this experience and helping our son and daughter-in-law care for our granddaughter has certainly had a significant influence on the way we look at things, particularly helping people with disabilities,” said Jack.  Since the birth of his granddaughter, Jack and his family have been particularly committed to United Way’s work that supports people with disabilities. However, his commitment to United Way started back when he was a young attorney and has been growing ever since.

More than 35 years ago, Jack was introduced to United Way through his firm’s workplace campaign.  He was a bit uncertain at first, but the more he learned about United Way and the impact they have on the community, the more he became devoted to their mission and work.

Over the past 35 years, Jack’s learned a lot, namely about United Way’s strength in targeting areas of need and focusing on gaps in services that the government or nonprofit community cannot meet. “United Way does it in the most effective and efficient way possible,” he commented. He cited United Way’s launch of PA 2-1-1 Southwest as a shining example of this. Launched just six years ago, PA 2-1-1 Southwest has assisted hundreds of thousands of people in need of help or resources, and now is expanding across the state.

Jack found United Way’s Tocqueville Society to be a way of doing something meaningful. “Giving a Tocqueville-level gift to United Way is one of the best uses of your money you can make,” Jack said. “United Way looks at areas of real need and deliver the most to the bottom line with our contributions.”

Jack is involved with many organizations, and he finds United Way’s effectiveness to be unparalleled. “In terms of helping people who have real needs that can’t be fulfilled elsewhere, United Way is so effective. I’m honored to be involved and see the contributions used as effectively as they are,” Jack said.