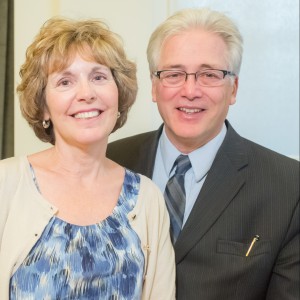 You Can’t Help but Get Engaged

“One of the best ways to have a positive impact in the community is to give to United Way. It doesn’t take a lot to make a difference. And it stays in our community. That’s the biggest thing.”

Fran and Lenette Solano care passionately about helping vulnerable people. He always knew he wanted to be a doctor. She has a degree in social work and worked with preschoolers before devoting herself full-time to their children. Both natives of small towns in northeast PA, they met nearly 42 years ago at a disco in Scranton, where Fran was doing post-graduate work after med school. They came to Pittsburgh for Fran’s residency, and put down roots as his career flourished. He’s now President of UPMC’s Community Medicine Division and Vice-President of its Physician Services Division. He also sees patients in his highly-rated Internal Medicine practice. “I’ve spent more than half my life in this community,” he says. “It’s been very good to me. It means a lot to me.”

Fran and Lenette joined the Tocqueville Society about six years ago. They were already supporting local charities that are close to their hearts. Both avid readers, they are particularly committed to Reading Is FUNdamental Pittsburgh, where Fran is a Board member. “I read to my children from the day they were born,” Lenette says. “I cannot stress enough how important it is to be able to read!” But they were sold on United Way once they understood its role in the community, and realized that they could choose to direct their annual gift. “You can support United Way-funded programs by designating to the Impact Fund, and still give to specific charities,” Fran says. “It’s a win-win. So many people in our community have fallen on hard times. United Way is there for them when they’re really in trouble. When you realize how vital and important this organization is, you can’t help but get engaged.”

Fran champions Tocqueville Society membership to his colleagues at UPMC because it gives busy medical professionals an ideal way to learn, give back, and connect with great people. “Tocqueville events are in very nice venues, but it’s the people who make the difference.”  He means it when he says: “If you’d like to attend a Tocqueville meeting just contact me. I’ll take you as my guest. You’ll be energized and inspired.”

The Solanos see the community as a fabric of interdependent relationships. Fran says, for example, that the best part about being a doctor is his lasting connection with his patients. On a larger scale, Lenette explains, “Fran and I are extremely fortunate to have each other and our family. We truly believe that our community’s success depends on success for all of its members. That’s why we support United Way.” She reflects on how her life has been enriched by meeting the many volunteers in United Way-supported programs and the people they help. “Their stories compel me to become more involved whenever I can, and to try to be a better person. They remind me that I have so much to be grateful for.”