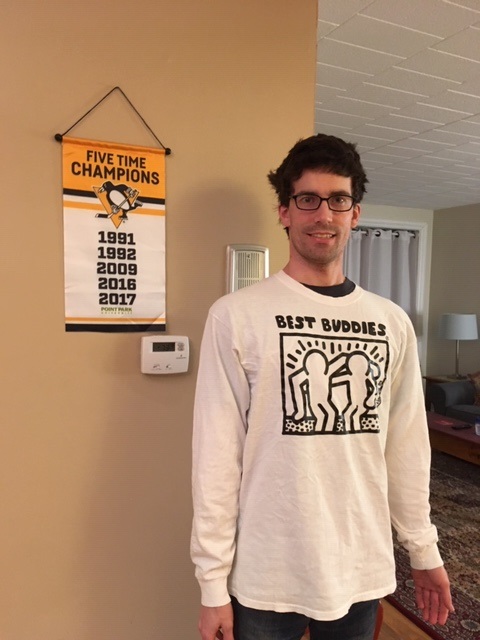 A little support led to the perfect new home

“You can see how this new apartment has changed his sense of independence.”

Michael Brucker, 32, was ready to move out on his own. But as a person with an intellectual disability, it was important to his parents, Lori and John, to find him a safe and affordable place near their home neighborhood – a place with little resident turnover, where Michael might be able to get to know his neighbors and feel comfortable in his surroundings.

“Michael can follow routines, but he struggles with change. He also has difficulty with judging safety, so we were looking for a community where shop-keepers and neighbors might begin to get to know him and support him as needed,” Lori explained.

After waiting four years, Michael received a Section 8 housing voucher, but he and his mom were unable to find an apartment that met these requirements. They went back on the waiting list for another five years, when Michael was selected again. This time, his mom discovered United Way’s Housing Connector program* who supported her through the process.

“Because Michael doesn’t have a standard income, this funding was really critical to finding him an independent situation. Thankfully, we were connected with Sandra Nesbit at the Housing Connector, and she helped us navigate everything,” Lori explained.

Lori and Sandra began pounding the pavement. They walked through Bellevue and Avalon looking for “For Rent” signs and scoping out locations that might work for Michael. “He doesn’t drive or take the bus, so the place needed to be walkable,” Lori said.

After working together with the Housing Connector to get Michael an extension on his Section 8 voucher, Lori finally found an apartment that met all of Michael’s needs. Now, Michael is happily settled in his new apartment, has gotten to know some of his neighbors, and loves to talk about his new place.

“It’s pretty good living by myself. I like it,” Michael shared. “I walk up the street and buy a newspaper and coffee. I can walk to get ice cream, and I can walk to my parents’ house.”

Lori and John are so glad to have Michael settled and they are thankful for the support received from the Housing Connector program. “This is not an easy process for any family. I was really grateful to have someone on our team,” Lori said.

*The Allegheny County Housing Connector, a partnership between United Way of Southwestern PA, ACTION-Housing, Allegheny Department of Human Services and the FISA Foundation, connects people with disabilities to affordable and accessible housing options in the community of their choice through various supports – the voucher is just one option. To learn more about the program, visit http://actionhousing.org/ .

Helping those in need, professionally and personally