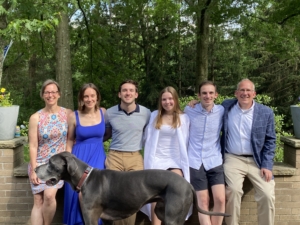 Committed to the Region’s Economy and Health

Amy Crawford Faucher and Gus Faucher did not grow up in Pittsburgh, but nine years later they are happy to call their adopted city home. Gus serves as Chief Economist and Senior Vice President at The PNC Financial Services Group, Inc., where he co-chaired the company’s United Way Campaign. Amy, a family physician, is Vice Chair, Primary Care Institute and Department of Family Medicine at Allegheny Health Network. According to Amy, “We felt welcomed and part of the community right from the start.”

Two years ago, the couple became members of United Way’s Tocqueville Society, seeing it as a way to deepen their commitment to Southwestern Pennsylvania and help address some of the most serious needs in the region. “Everything going on in the world right now, including the pandemic, only heightens the critical need to address healthcare issues and social disparities by supporting organizations such as United Way,” says Amy.

In addition to being part of companies that strongly support United Way, Gus says they personally chose United Way “because of its broad-based approach and ability to address the greatest needs of diverse populations.” Amy points out “United Way’s reputation for being well-run, well-respected, and supporting nonprofits with deep roots in the community” as being close to their hearts. They also like being able to direct their philanthropy to areas they care about most.

In their free time, Gus is an avid, eight-time marathon runner, who serves on the board of Veterans Place of Washington Boulevard. Amy enjoys horseback riding and hiking, and has proudly completed the 35-mile Rachel Carson Trail Challenge.