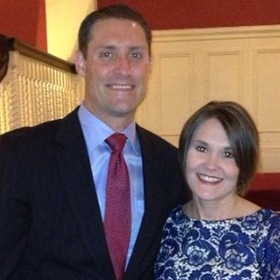 How to Make a Difference Worth Remembering

Geoff Kasse, a Principal and Wealth Management Advisor at JKS Financial, was always good with numbers; and has had a steady career trajectory in the financial services industry since 1998, when he interned at Northwestern Mutual as a rising college senior. But he doesn’t take all the credit for his success. “I’ve been so lucky to have parents who pushed me to excel, and to attend schools where I was challenged to do my best. As I got older and experienced more of life, I realized that not everyone has the same opportunities. I’m very fortunate to have what I have.”

“That’s what appeals to me about United Way,” Geoff continues. “In my work, I help people plan their finances to ensure their security and independence. So many people just don’t have the resources to protect themselves. United Way does a great job of creating opportunities for vulnerable people, like at-risk kids, frail seniors, and people who have fallen on hard times. United Way gives people who are professionally accomplished the chance to give back, and to take care of the community in ways they could never do on their own. That’s what I want people to know about United Way.”

Geoff was a Leadership donor in his early professional days. As he’s learned about United Way’s vast resources and extensive impact on Western Pennsylvania, he became a Tocqueville Society member and co-chairs the Emerging Leaders Tocqueville Committee – a committee recently formed to spread the word about the work of this United Way; and to reinvigorate the experience of being a Tocqueville donor. This group is focused on attracting that next generation of corporate and civic leaders to embrace the mission of United Way at a very significant level while enjoying the comradery of the people in the group.

Geoff, 39, has great admiration and respect for the seasoned executives who historically impressed upon their employees the imperative to give back.  “It’s good to set a quality example.  But, today’s emerging professional leaders have many options for their charitable dollars,” he said.  “We want that next generation of donors to have the same confidence in the impact and accountability of United Way-supported programs as the established corporate and civic leaders have.  This is why one of the goals of the Emerging Leaders Tocqueville Committee is to add another dimension: the group is working to provide vibrant interactive experiences that let members see firsthand what they’re a part of while they have fun hanging out and learning together.”  Geoff has enjoyed the variety of these events: unprecedented opportunities to learn from business leaders and innovators like local CEOs David Porges (EQT) and Rob Daley (4moms); visits to the PA 2-1-1 Southwest call center, where he observed Resource Navigators deftly handle the staggering number of daily calls; and the annual Build-A-Bike event, where his work team was galvanized when “we realized that this could be the first bike a child ever gets to ride.  We said, ‘let’s make it a great experience.’”

Geoff and his wife Kristen have been married for almost nine years, and recently welcomed their third child. “We met in the professional world.  Kristen has always been extremely motivated, mature and responsible as a professional.  So, not exactly sure what she saw in me…” he deadpans.  “She has a giant heart and is passionate about helping those who don’t have the same opportunities.  Which is a core characteristic for both of us.  In fact, one of our first nights out was at a Valentine’s Day event to benefit Girl’s Hope of Western Pennsylvania.”

Geoff and Kristen have clear priorities.  “At the end of the day, no one’s going to remember how much money you made or how many toys you had,” he says. “But if I can have an impact on one at-risk youth, he or she will remember that forever.  Or if I can help one senior experience another Christmas at home with family – that will be remembered. That’s what’s important.”