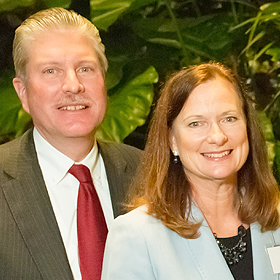 A Love of Pittsburgh and a Love of Giving Back

Both growing up and attending school in Pittsburgh, Scott and Sue Lammie share a love for more than just each other and their three sons. The Lammies’ involvement with the Pittsburgh community stems from their love of the city, and their love of giving back; using the United Way as a tool to reach out to those in need in the city they love.

Growing up the second youngest of 5 children, Scott has always been used to being in a full house. When his father passed away when he was only seven years old, Scott got his first taste of working as a unit to help those in need- his family and his single mother. When his mother’s second husband passed away 10 years into their marriage, Scott’s family values solidified, explaining his passion for “family values and being involved in organizations that really focus on giving back and helping out.” These values rooted from his place in a family that really needed to help each other, explaining that it rounded him and encouraged him to help others in need.

With the help and encouragement of his mother and family, Scott got a great education beginning at Allderdice and then continuing on to get a degree at Duquesne University. After graduation, Scott spent 14 years in public accounting, where he was first introduced to the United Way. Explaining that public accounting made giving to the United Way an expectation, he concludes that it is a great way to get people involved. Around seven to eight years into his public accounting career Scott was introduced to the healthcare industry, where he soon after joined UPMC in 1990. Now celebrating his 25th year of employment at UPMC, he is proud to say that including public accounting, his UPMC relationship goes back 30 years.

Proud of the values UPMC has, Scott makes an easy comparison to the values of the United Way. Now doing work with the United Way for almost 40 years, he explains that he has gotten even more deeply involved since joining UPMC because of their correlated values. Explaining UPMC’s goals to increase employer-based giving and volunteering, Scott describes the United Way as a tool to giving back to the community. Having help solving critical issues plaguing our community is just another reason why the United Way is so fortunate to have great leaders like Scott so involved in philanthropy and the community.

When Marty McGuinn asked Scott about becoming a Tocqueville member, he just couldn’t refuse. “Marty is just not someone you say no to,” he chuckles. Describing his donations as “investing” in our community through the United Way, he is proud to say he donates to “an essential community organization that is going to help the most vulnerable at risk individuals and families within our communities.” Encouraging others considering becoming a Tocqueville member to “step up, pay it forward, help others,” and “address basic human needs,” Scott believes that through collaboration and partnership we can make a difference for the entire community.

Explaining that the Heinz Award volunteer recognition event is his favorite event, he describes the award as “inspiring,” admiring the volunteers that have dedicated a large portion of their lives (20-30 years) to continually serve those in need. Participating with his wife for the past 6 years in the event, the two love hearing the incredible stories of individuals giving back to their communities, many times without any formal recognition.

Loving to see so many people engaged, Scott considers Pittsburgh to be a “very special place because we have a higher number of residents in our region who are dedicated to giving back,” he explains, “and the United Way is a huge part of that as well.” Everyone needs to find some important community organization or cause and support it financially and volunteer and become engaged in our community, which Scott believes is the reason why Pittsburgh is recognized the way it is.

His interview coming to a close, he ends with voicing his hope and belief for the upcoming generations to be even more focused and dedicated to helping the community. His optimistic outlook on the future expresses expectations of progress and a strong community service focus. Ending on a modest note, Scott leaves us by saying “I see many people that are in need, and I feel naturally motivated to reach out and help those people.”