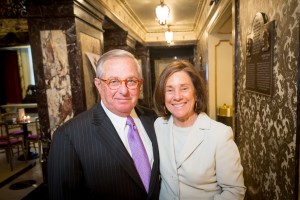 Charlie Ferrara was a rising young executive at Northwestern Mutual Financial Network in St. Louis when he was appointed Managing Partner of the Pittsburgh network office and relocated here with his wife, Jackie, in 1975.  It wasn’t long before local corporate leaders, noting the steady growth of the Ferrara Group in Pittsburgh, introduced Charlie to United Way. “About ten years after Jackie and I moved here I got a phone call from Bob Bozzone, ” Charlie recalls. The then-President and CEO of Allegheny Ludlum told Charlie, “You need to learn something about United Way. We’re having a meeting and you need to be there.”

“You could say we got involved with United Way because Bob Bozzone caught me by the scruff of the neck,” Charlie laughs, “But it was perfect timing.” Until then Charlie and Jackie had mainly focused on work and on raising their four children. “I hadn’t had a lot of time to think about philanthropy, but the moment was right,” Charlie says. “We were getting to the stage in our lives where we had the mental freedom, and a little time and money, to get involved.” The Ferraras have been United Way supporters ever since, based on what Charlie realized at that fateful breakfast meeting: “There are all these worthwhile organizations that are doing really great work,” he says. “I’d give them some money if I knew about them, but I don’t. So I’ve always looked at United Way as the entity that does the due diligence for me. United Way identifies important causes and selects great agencies to do the work. Compared to that, my job’s pretty simple. I give, and United Way distributes my donation. It’s our way of looking after other people in the community. That’s our philosophy, and that’s why we’ve always been so supportive of United Way.”

Charlie has shared his time and business acumen, too, at first serving on United Way’s Impact Cabinet and consistently holding a seat on United Way’s Board of Directors until two years ago. About ten years ago he also agreed to chair the Tocqueville Society for one year that became three. “We succeeded in acquiring many new Tocqueville members. In fact, one year I think we actually won a national award. I could have been a little more successful at finding my successor,” he smiles. “But in the end it worked out pretty well.” Charlie and Jackie make a point of attending Tocqueville Society events: “I think that attending is a signal of support. When people see you at these events, and you see them, that furthers the cause. Essentially, you’re all saying ‘I believe in United Way.’ There’s a ripple effect that I think is very helpful.”

Charlie remembers a time when Pittsburgh’s corporate glitterati hosted exclusive private Tocqueville events for members at their homes. These popular events occur less frequently now; this is just one of the effects of a sea change Charlie has witnessed in the local corporate landscape. “When we moved here Pittsburgh was ranked third in the country in corporate assets, behind New York and Chicago. It was relatively easy to run a campaign when United Way could just go to US Steel or Gulf Oil. Those days are over. Now we need to look to the people in our local firms. Those aren’t really small businesses. But they’re very successful and there are a lot of them. That’s our challenge. It will take a little more work, but the flip side is that those people have great capacity. I’m sure many of them are as interested in philanthropy as others have been before them. Current Tocqueville Society members can help United Way by identifying people who have very successful enterprises but perhaps are flying under the radar.”

One thing hasn’t changed since 1975: in Charlie’s experience, Pittsburgh is still a place where charitable giving is a win-win proposition. “Years ago when I moved to Pittsburgh I made a courtesy call on Fletcher Byrom, the Chairman of Koppers Corporation. We were having a nice discussion, and he said to me, ‘Charlie, there’s really only one thing you need to know about Pittsburgh. Pittsburgh is a big enough town that a person can do something significant, but a small enough town that it will be noticed.’ That’s still true. It makes a big impact when a person steps up.” Charlie admires the large Pittsburgh corporations that are working with United Way to solve the community’s problems. “”I give them a lot of credit,” he say. “But we have to go deeper. We have to get out there and tell our story.”

Charlie and Jackie have been telling that story by living it. They are both quite active in the community and directly support a few select charities. “We do have some other interests that we try to support, but United Way always has a place when we think about helping the community,” Charlie says. “It goes to what I said earlier. United Way helps all these people, agencies, and causes that I would help if I knew they were there. That’s the concept we have to get across. That’s the concept that would get more people to say, ‘this is the way I support my community.’”