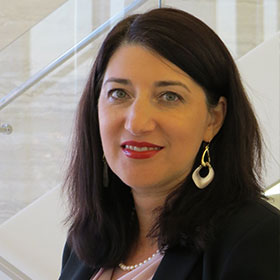 Women Have to Decide What’s Important

Ellen Freeman was a young single mother when she emigrated from the former Soviet Union in 1993 and settled in Pittsburgh with help from local resettlement services. “I come from a culture that supports women in their professional lives,” she says.  Six years later, after her remarriage and the birth of her second daughter, she’d earned two graduate degrees and had a bright future in law. Now a partner at K&L Gates, Ellen specializes in employment-based immigration issues. She has a clear perspective on the refugee experience, because she’s lived it herself.

Ellen was inspired to join the Women’s Leadership Council after hearing Laura Ellsworth, also a successful lawyer, speak about the value of United Way’s work. Supporting United Way makes sense for women, Ellen says. “We have a duty to give back once we’ve attained a certain level of success. But time is valuable, and with so many organizations seeking our involvement, women have to decide what’s important. I support United Way because it’s so easy to relate to the Women’s Leadership Council’s goals. United Way didn’t come to me,” she says. “I came to it.”

“Women in high level positions need mentors and camaraderie, relationships that aren’t always available at their work places,” Ellen continues. “The WLC is a very nourishing place to gain knowledge, experience, and support. There’s nothing else like it in this city.” She appreciates the fact that WLC members come from many different places and backgrounds—“You don’t have to be like somebody else in order to fit in”—and that there are so many meaningful ways to participate. “I don’t just want to write a check,” she says. “There is a great joy in coming together as women around our common goals.”