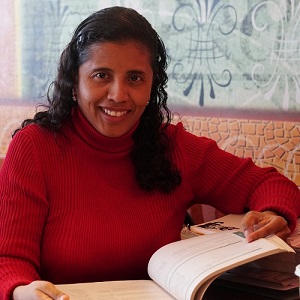 “No matter how dark it is, try to see the light at the end of the tunnel. After the storm, the sun will always rise.”

Lina is no stranger to adversity. At 16, she was the victim of sexual assault in her native country, Colombia. “It marked my life forever,” she reflected, including fueling her desire to help others. Shortly thereafter, she enrolled in medical school and met her soon-to-be husband. They moved to New York and had a daughter. When Lina’s husband turned abusive and prevented her return to medical school, Lina summoned the strength to leave him. “I was so afraid and alone,” Lina said.

Lina returned to Colombia with her young daughter, Stephanie, to finish medical school and began practicing as an internal medicine physician. However, she knew in her heart it was best for her and Stephanie to return to the United States. She found her way to Pittsburgh with the intention of taking the necessary medical board licensing exams to transfer her medical license. However, six-year old Stephanie became ill, requiring hospitalization.

Lina found work at UPMC and a neighbor to help care for Stephanie. She also pressed on with studies for her medical exams. Yet, Stephanie required signficant care, more than her neighbor could provide. Suddenly, facing a lack of child care, Lina had to quit her job and put her dreams aside. “I was here alone, and facing so many challenges with my daughter,” Lina recounts.

Lina battled her way through every difficult circumstance life threw at her, refusing to give up the hope of a better life for herself and Stephanie. She emptied her savings account to pay for her first set of medical exams. Despite her perseverance, without a job to meet her family’s needs, Lina needed a lift up. That’s when a friend told her about South Hills Interfaith Movement (SHIM) and the Smart Investments program, funded by United Way of Southwestern PA’s United for Women initiative.

Lina received help to get back on her feet from SHIM and United Way’s United for Women program. SHIM helped her access basic needs, such as food. Through United for Women, she received help paying for gas through a partnership with Travelers Aid. Also, through SHIM’s Smart Investments program, she was able to pay for the test preparation material she needed for her next set of medical licensing exams.

“For many years I asked why. Then I realized those events made me stronger, more human,” Lina reflects.

Today, Stephanie getting better.  Lina continues to study around the clock,  while looking for ways to fund her remaining medical exams. She is working relentlessly toward pursing a residency in internal medicine and a career as an interventional cardiologist.  “I have so many goals. I love to help others,” Lina stressed. “I am not a victim. I am a warrior.”